Part #1 of this guide describes First Launch of the Editor, its UI, used File Paths (Chapters 1 to 4).

Unfortunately, we have issues with updating the web version of this guide due to the large size of our guides (we have reached the max limit for pictures for an account, etc). Sorry for that.

However, you can find up-to-date versions of guides in PDF format here: Drive.google.com

On the PC platform, the same guides are available at the folder of the *installed game* within the "...\en_us\Sources\BinEditor\Guides" directory.

Or, you can open the folder with the documentation package directly from SnowRunner™ Editor, by selecting Help > Guides in its main menu.

Quick links to parts of this guide:

If you want an offline copy, you can download the full guide in the PDF format here.

This guide provides an overview of basic operations necessary to create a map mod with SnowRunner™ Editor. Along with it, brief instructions on viewing trucks are also provided.

The Editor is installed along with the game itself. You can find it in the folder of the installed game, typically at the following (or similar) directory:
C:\Program Files\Epic Games\SnowRunner\en_us\Sources\BinEditor\

NOTE: If you have installed the Public Test Server (PTS) version of the game, then paths to all files of this version will be similar to the ones shown in this guide. However, these paths will have SnowRunnerBeta in them instead of SnowRunner.

To open the Editor, you need to launch SnowRunnerEditor.exe in this folder:

No configuration is necessary, you can just launch it. 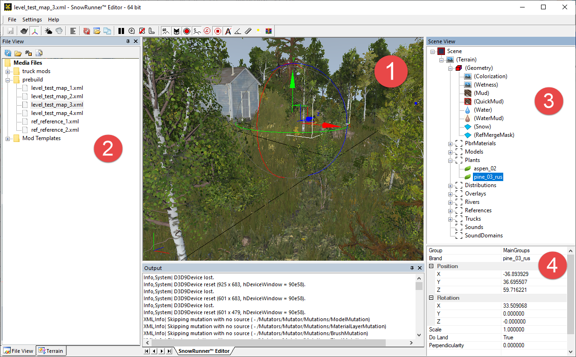 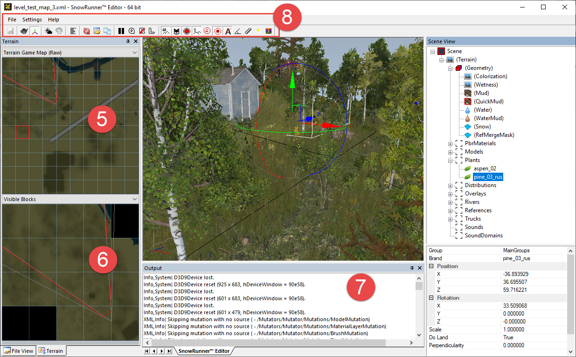 The UI of the editor consists of the following:

NOTE: However, when a brush is selected, the left-click and right-click behavior is different, see below.

Brushes of various types are frequently used in the Editor. They allow you to add the mud, snow, paint layers of the materials, paint distribution maps for plants, and so on. When you will be painting with a brush, the Brush dialog will appear within the main panel of the scene. The particular properties (modes of the brush, etc.) displayed in this dialog depend on the particular brush. However, most of the brushes look pretty similar:

Painting with the brush is typically performed by pressing and holding the right mouse button while moving the mouse. By pressing the left mouse button, you can apply the changes.

Typically, brushes have some universal settings:

Undo Current Changes in the Brush dialog - discards the current changes during painting, reverts all changes made after the most recent right-click.

The Geometry section with the Scene View panel contains a lot of brushes. For their descriptions, see "5.2. “Geometry” Brushes for Terrain" below and its subsections.

The Editor supports the selection of the multiple objects of the same type (e.g. Models, Plants, etc.).
To select multiple objects, hold CTRL while clicking on them (either in the main window or in the Scene View panel). Objects will be displayed as selected in the Scene View panel, and names of the selected objects will be displayed in the main window next to the pivot, which is common for the selected objects:

To select adjacent objects in the Scene View panel, hold SHIFT while selecting them.

3.5. Groups & Copying Them Between Maps

When you are working with objects in the Editor, you can use Groups as categories for them in the hierarchy of objects. These groups can contain only objects of the same type (e.g. only models, or only plants, etc.).

For example, you can add a group for a set of buildings:

To add a group and assign an object to it:

The main goal of groups is to help you organize objects.
However, when objects are in the group it is easier to select multiple objects from them (see "3.2. Selection of Multiple Objects" above).

Moreover, after the creation of the group and assigning objects to it, you can copy all the objects from this group to another map.
This is possible because information about objects added to the group are saved to a separate file in the subgroups directory with the folder of the level (see "4. File Paths and Naming" below). 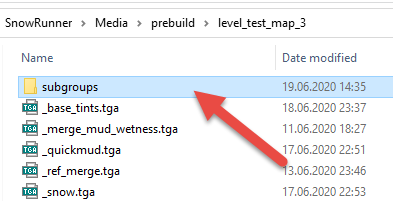 So, you can copy the file corresponding to your group from this directory to the subgroups directory of another level. After that, the objects from this group will appear at this level, when you open it in the Editor.

NOTE: Objects from the copied group will appear in the new map at the same positions they have on the initial map.

NOTE: However, when a brush is selected, the right-click behavior is different, see "3.3. Typical Brush dialog" above.

The list of commands within a context menu depends on where particularly you have performed a right-click. If you have right-clicked an object, the commands related to this object will be displayed in the upper part of the menu, with the name of this object as a prefix (e.g. “country_building_01_c” in the picture below). If this object belongs to a group, then below them the operations related to groups will be displayed, with the name of this group as a prefix (e.g. “455” in the picture below). If you have clicked the particular object or a section of the particular type in the Scene View panel, then the operations related to this type of object will be listed, with the name of this object type as a prefix (e.g. “Models” in the picture below). And, also, the list will contain the list of general context commands (e.g. Reload, Rebuild Terrain, etc.) below all other commands. 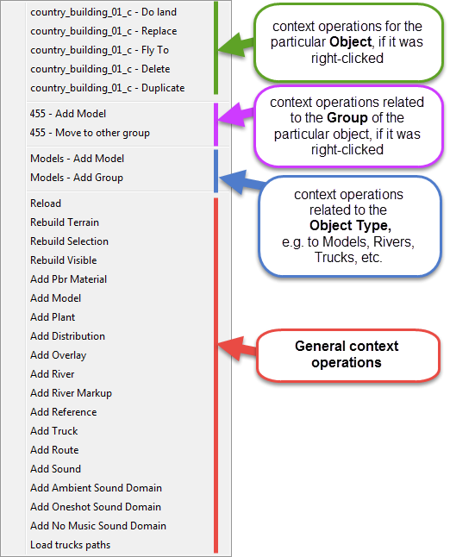 The list of most frequently used commands is shown below:

Source files of levels and references are stored in the Media\prebuild folder, which is created in the Documents\My Games\SnowRunner\ folder.

NOTE: If you have installed the Public Test Server (PTS) or Closed Beta Testing version of the game, then paths to all files of this version will be similar to the ones shown in this guide. However, these paths will have SnowRunnerPublicTest or SnowRunnerBeta in them instead of SnowRunner. I.e., your particular paths will depend on the version of the game you are using.

Full path to it is typically similar to the following:
C:\Users\<name_of_user>\Documents\My Games\SnowRunner\Media\prebuild

NOTE: The prebuild folder will be filled with folders and files of levels after you create these levels. At the first launch of the Editor, this folder is empty. Files and folders in the screenshot above (and in the similar screenshots that follow) are shown for illustrative purposes only.

In this folder, each level corresponds to the <name_of_the_level>.xml file (e.g. level_test_map_1.xml). It is the main file of the level and the file you need to click in the File View panel of the Editor to open the corresponding map. The folder with the same name (e.g. level_test_map_1) contains all additional source data of the level, its source textures, and so on.

The compiled level files generated by Editor and their .zip archives prepared for uploading to mod.io are stored in the Media\levels folder:

When you pack the level in the Editor, the system, along with the .zip file (see above), also generates the .pak file for this level. It is automatically copied to the folder, where all local mods of the game are stored, i.e. to the Media\Mods folder.
For example:
C:\Users\<name_of_user>\Documents\My Games\SnowRunner\Media\Mods

For more details on packing, see "6. Packing a Map".

Quick links to parts of this guide:

Hey guys. I'll make my map but did not find pole lights on. Tested amp more times change the time look at night midnight whatever. Didn't open the pole lights. How can i make it this thing? Search from google but anyone talk this thing. Maybe my mistake to find the pole lights yelling but ı dont understand. Andybody help me plz.

What particular model of the lamp poles are you using?

how can i undo copy height map i accidently clicked on it and it ruined my whole map after almost being complete! i have about 50hrs into this map

the wireframe is still there but when i rebuild terrain it goes flat.