This guide covers the correct methods for exporting to an Fbx file. Necessary settings are described for three software packages: 3ds Max, Maya, and Blender. 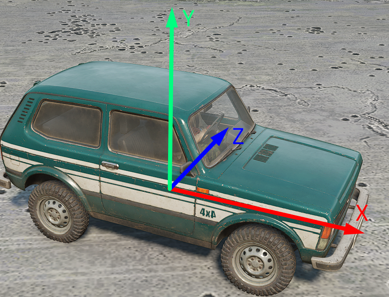 This orientation corresponds to the (x, y, -z) axes in Maya: 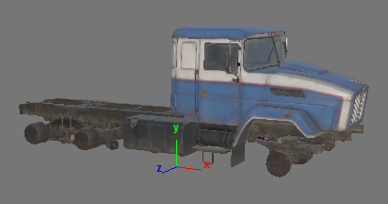 In Blender, the axes are the same as in 3DS Max. So, the orientation of the game corresponds to the (x, z, y) axes orientation in Blender: 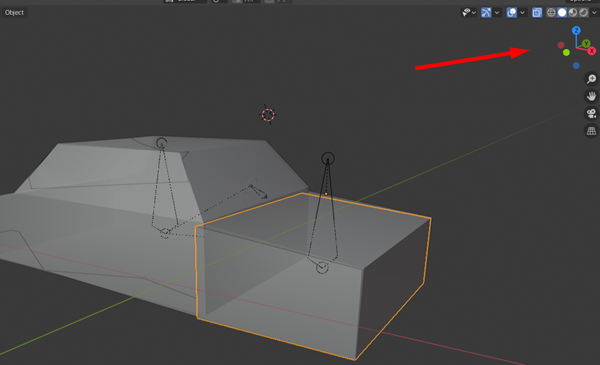 Thus, to correctly export your truck, the forward axis of your truck should be looking in the direction of the OX axis during the export.

Export Settings in your 3D editor should match the screenshots below exactely. Be sure to refer to the correct section that corresponds to your 3D editor software package.

After exporting, when you come to specify truck properties in XML, you should take into account the difference in orientation of the axes as described above.

Preparing the scene in 3ds Max

In 3Ds Max, bones, helpers or meshes can be used as the skinning bones.
However, for the SnowRunner engine:

We recommend that you use one of the following approaches for setting up a truck in 3ds Max:

Before export, we recommended that you use the Reset xForm utility for all objects.

All materials must have the correct names. Only Latin characters, digits, and “_" are allowed. Names should not contain special characters (with the exception of “_").

You only need to export skinned meshes, bones, and cdt meshes. Therefore, we recommend you to use Export > Export selection.

Export settings should be as follows: 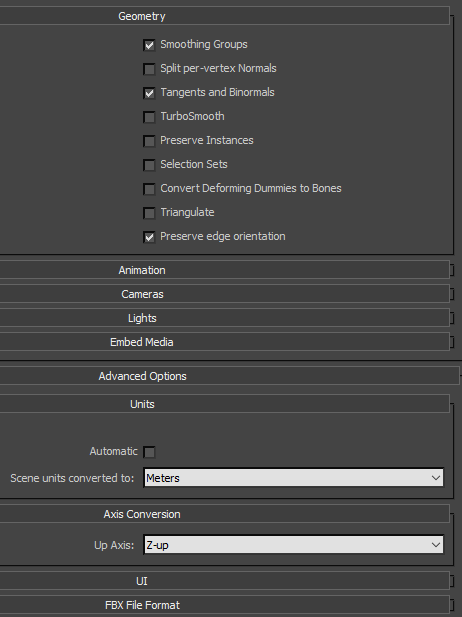 Preparing the scene in Maya

The unit settings in the scene should be as follows: 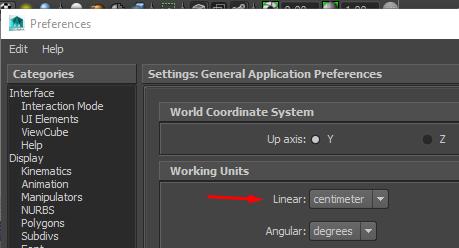 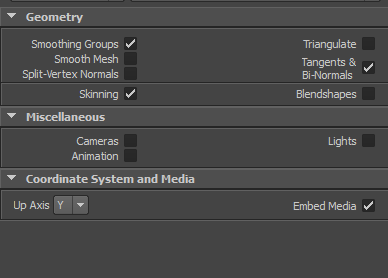 Preparing the scene in Blender

To ensure that the units in the scene and in the game both match, the settings in Blender should look like the following: 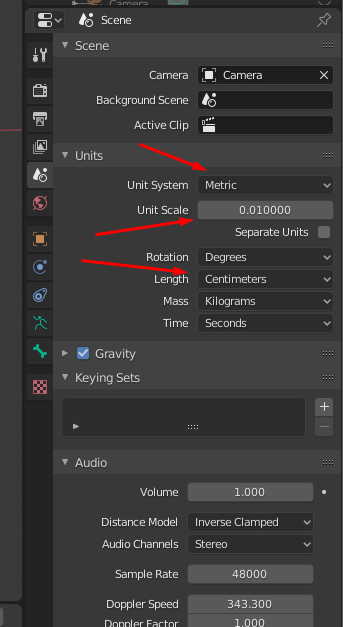 With these settings, the import of the fbx-template can be done with the default settings of the importer.

Setup of the truck

In the scene, the truck should be located in the direction of the X axis. 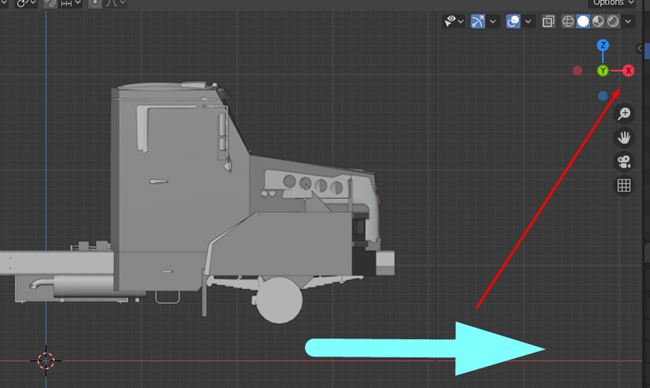 The orientation of the bones is important for the description of the truck behavior. Therefore, to achieve simpler and more convenient XML descriptions, we recommend you to build a skeleton using Keep Offset Parent. 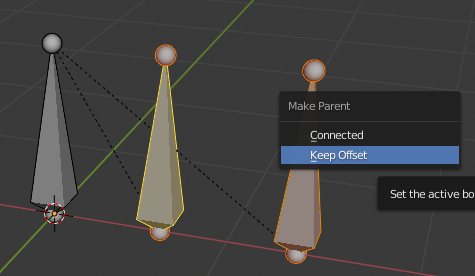 Collision objects can be parented to physical bones as follows: 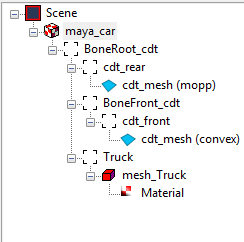 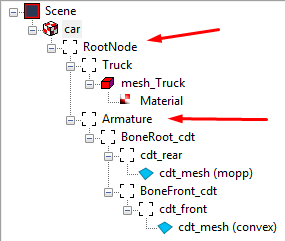 Due to the creation of the additional Armature node, the engine converter cannot parent the skinned geometry under the root bone and so forcibly creates the RootNode node by itself.

Wrong workaround for the Armature issue

In XML, you can explicitly specify the root bone using the ModelFrame attribute. In this case the extra nodes will be ignored.

However, in the case of this approach, the root frame will actually remain in the spawn point, since the root node remains in place. So, the system will incorrectly identify the coordinates of the truck. This will lead to the incorrect operation (for example, in the game, the zones on the map will not open).

Correct workaround for the Armature issue

Nodes that are not described in XML are ignored (they are forcibly attached to the parent nodes). Therefore, we may consider the RootNode, which was created during conversion, as a root physical bone. To work correctly in Havok, this node must have a collision object. So, for correct operation, you need to change the hierarchy and re-parent the cdt mesh: move it from its current position under the root bone and put it at the level of hierarchy where the Armature skeleton is: 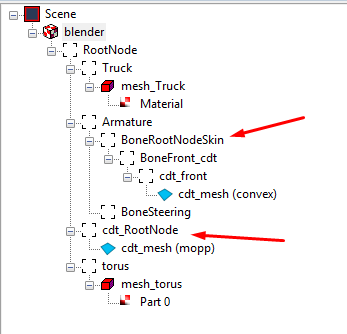 In the case of this approach, an explicit description of the root bone in XML is not necessary, but if you want to do it, then you need to remember that the RootNode is always the root.

To avoid exporting unnecessary components, use Export Selected Objects and disable the addition of leaf bones. The settings for this are shown below:

Very please video tutorial! I am from Russian (

Is there a way to open a mesh from the game in blender?

hi, i'm getting "unable to crate d3d device" when trying to convert this model for use in-game. i followed all the instructions, and it's hard to diagnose the issue without a more descriptive error log.

can you show me what the blender structure should look like for the root node issue?

unsane_chimera There is, the Quick Guide: Adding Trucks from this site shows you how to export vehicles from the game into FBX files. Then, in Blender go to File>Import>FBX and find the folder that SnowRunner created. There are a bunch of FBX there for upgrades and for the truck itself. Don't forget to edit the scene settings as described above before importing the truck FBX or it'll be scaled improperly.

When exporting to .FBX from Blender using a 0.01 unit scale and centimeters the models appear 100x too large in game. I.E to get a 50 cm wide object in game it needs to be 0.5 cm in blender. So why even set the unit scale and unit in blender?

Oh good, so it's not just me LOL

Please tell how extract the model from the game to 3ds max?

some one needs to make a tutorial on this what do you do with the fbx file after you have it where do you put it?

After exporting the default truck mod from blender with the changes to cdt_RootNode as per this guide, what are the explicit changes made to the mod_truck.xml file because I get the error "root node has no children"

could you please update the blender export for newest version of blender? Export is doing some kind of issues to me.